Relieve Anxiety, Depression, & Improve Sleep with This One Flower

For a flower as unique as it is enchanting, it can be hard to think that far more secrets lay beneath its inconspicuous petals—save for delicious passion fruit, of course.

And yet, traditional herbalists and healers of old decided to look a little farther beyond beautiful appearances. In the end, they found some amazing health benefits in the plant’s bewitching blossoms.

To be more precise: passionflower appears to have a calming, sedative, and hypnotic effect on the body. This can come in handy for specific mild health issues, such as anxiety and insomnia.

Ever since this simple discovery found in such a humble tropical vine, the race has been on to learn so much more about what passionflower can do in this vein—both in the realms of traditional herbalist knowledge as well as research. 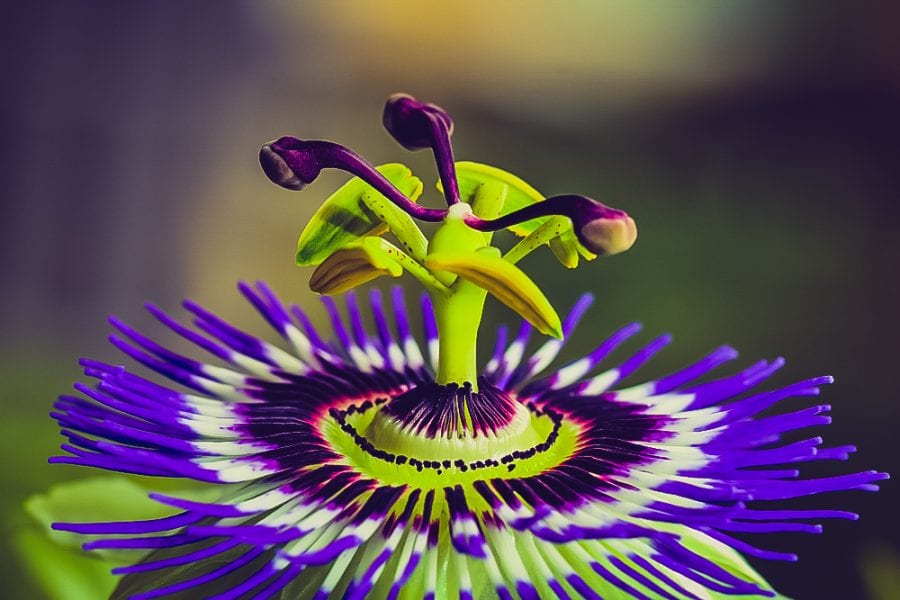 WHAT IS PASSION FLOWER?

Passionflower (Passiflora incarnata and others) can refer to many species of vining, flowering, and fruiting tropical plants native to South America and parts of Asia.

Though the flower is used as a remedy, it’s the sweet, delicious, pulpy fruit and juice—dubbed passionfruit—that may be the plant’s more recognizable trademark.

All species of passionflower vines vary in appearance in small ways. But they do share one common trait among some others: their large, elaborate, and intricate flowers, some of which grow to be several inches in diameter.

Among some of these unique species, such blooms possess qualities that are even more unique when it comes to plants: namely, benefits for relaxation and sleep.

In South America, for example, the species Passiflora edulis was used as medicine for pain, overexcitement, and female health issues.

Further north up in the United States, First Nation peoples had similar uses for Passiflora incarnate (also called maypop), while also accepting it as a wound and liver medicine.

A PASSIONATE PLANT WITH A PEACEFUL PURPOSE

How did such a singular flower get such a passionate name, despite its calming capabilities? It is said that the Spanish explorers who learned about the herb among the indigenous Peruvians saw the Christian cross (or “Passion”) within its flowers many a time.

While its English name contains Christian origins, the true roots of this plant and its uses stretch back even further back before that time by thousands of years—reportedly used by the Cherokee, Aztecs, and Houma peoples far before them. And it’s among these ancient peoples that its first uses for easing anxiety, nervousness, and fitful sleep appeared.

Not long after its exposure to the Spanish, the blossom’s convincing effects and popularity soared high—high enough to cross the Atlantic and take root in Europe, and then back in colonized America, for a time.

THE LOSS OF A NATURAL SEDATIVE REMEDY – WHAT HAPPENED?

Throughout the 18th Century and on until the early 20th Century, the use of passionflower for anxiety and sleep spread like wildfire in Europe—spreading almost as fast as the tendril-like vine itself could grow.

It also took hold in America, being a standard natural prescription for nervous disorders and insomnia. The plant, also striking in its beauty, was a favorite flower cultivar and show variety.

Even in the early 1900s, passionflower was included as a part of some major medical texts as a widely accepted remedy even for depression and other complaints. Then, in the 1970s, the herb was removed from medical texts and over-the-counter remedies in America, mainly due to the lack of human-based health trials.

In Europe, however, the use of the blossom in mainstream products stayed strong.

And while American medicine found it too unstudied in its safety—enough to only accept it as a supplement—recent research and studies surrounding this stunning flower today (including new human studies) would make one wonder why it was ever removed as a modern remedy in the first place!

HOW DOES IT WORK?

The annals of herbalism, early modern medicine, and evidence-based data have plenty to offer to attest for passion flower’s near-miraculous powers on the nervous system.

But what does science have to say? Apparently, quite a bit—and a lot in favor of its anti-anxiety & sleep quality-improving properties most of all.

Initially, a tea of the vine’s leaves, stems, and flowers was steeped as a calming tea for tension, uneasiness, trauma, and even depression.

For near centuries, all medical practitioners had to vouch for these anxiety benefits was the enormous body of traditional experience and—in the 20th Century—a few studies. But today much more has been discovered about how the botanical works, proving that it does indeed live up to its centuries-old reputation.

In one 2012 study, some of 60 patients were given passionflower to ease their anxiety before going into spinal surgery. Some were also given a placebo. In those who took the passionflower remedy, relief of anxiety was markedly more superior.

Another similar study was undertaken in 2013, only this time with dental patients. The same results were observed: while the placebo had beneficial effects, those from passionflower far surpassed them!

While most studies on the botanical mention that more trials are needed to fully prove that passionflower can be used as an anti-anxiety remedy, these results are nevertheless very real—and hopeful.

How does its anxiety alleviation work? Closer research into its actions—as seen in this 2010 article—shows that it may very well have to do with the way passion flower’s compounds bind to receptors in brains and nerves. It specifically attaches to GABA receptors, which are responsible for elevating mood and promoting relaxation.

Naturally, an herbal remedy that helps calm people down should no doubt help on the sleep side of things, too.

Just like with its use for anxiety in ancient times, a tea of the leaves, stems, or flowers of this tropical vine was administered as a natural folk remedy for helping bring on sleep. Today, a modern extract could very well achieve the very same results.

Up until the 2000s, only studies on animals proved that sleep enhancement was possible, but not yet in humans. In 2011 however, a trial on 41 subjects found that compared to a placebo, those who took passionflowers for sleep problems had a much easier time overcoming any insomnia.

Two years later, in 2013, passionflower was studied in a trial comparing a popular pharmaceutical sleep aid to a mixture of three hypnotic herbs that included passionflower, as well as hops (Humulus lupulus) and valerian (Valeriana officinalis). In the trial, the herbs performed just as well as the drug.

No doubt, this natural sleepiness induced by passionflower—and which creates no side effects—can be owed to the same actions behind its anti-anxiety effects. More specifically, it helps relax the nerves and brain just enough to help bring on a sleep state when it would have been difficult to reach otherwise.

BRINGING PEACE OF MIND IN MORE WAYS THAN ONE

Working together, passion flower’s anxiety-soothing, sleep-promoting qualities join forces to bring you one ultimate benefit in the end: relaxation and peace of mind. When working with other anti-anxiety herbal combinations, the plant could potentially achieve even more for peace of mind and sleep.

The famed flower has drawn so much attention as an herbal remedy, in fact, that famous natural doctor Josh Axe recommends it as an overall nervous system tonic and fantastic support when struggling with stress, tension, nervousness, and irregular sleeping.

Axe says: “Studies have shown that passionflower may be just as effective as synthetic drugs for generalized anxiety disorder (GAD)!”

“It’s common to see passion flower combined with other calming herbs such as valerian root and lemon balm, chamomile, hops, kava, and skullcap.”

Generally speaking, if people face the common struggles of stress and anxiety or trying to get deep, restorative sleep, passionflower may be just the natural remedy to try—and it just may work.

WHEN TO CONSIDER TAKING PASSION FLOWER

Intrigued by the research, healing history, and promises of this magical flower?

If the following issues are recurring time and again, exploring passionflower as a healing anti-anxiety supplement could be a massive boost to health—not to mention its nighttime perks that help catch those zzz’s.

Note: passionflower cannot permanently cure or get rid of any disease or disorder, even those related to sleep or anxiety. It should also not be taken if pregnant or using blood thinners.

BUT IT DOESN’T END THERE…

Like so many other herbs out there, passionflower is not limited to benefits exclusive to anxiety and sleep. In fact, both studies and traditional knowledge reveal that this fascinating vine could be capable of that and so much more.

ENHANCE THE POWERS OF PASSION FLOWER WITH OTHER HERBS

Research shows that passionflower is not only promising but readily and demonstrably effective for helping with anxiety and sleeping problems.

And yet, studies also show that passionflower also tends to be a whole lot more productive with the help of other herbs with similar effects. And we couldn’t agree more.

We’ve included passionflower as just one of many herbs carefully hand-picked and selected to be in our Tranquil Mind formula, specially formulated for support during times of stress, sleeplessness, anxiety, nervousness, and general unwellness that weighs not only on the body but the mind as well.

Try Tranquil Mind, not just for passion flower’s sleep and anxiety benefits—there are also adaptogenic, antioxidant, digestive, mood-boosting, and energy replenishing herbs like ashwagandha, Schisandra, and gynostemma to be found. This helps restore the body in the face of stress and anxiety while regulating sleep to bring overall health and wellness back into balance. 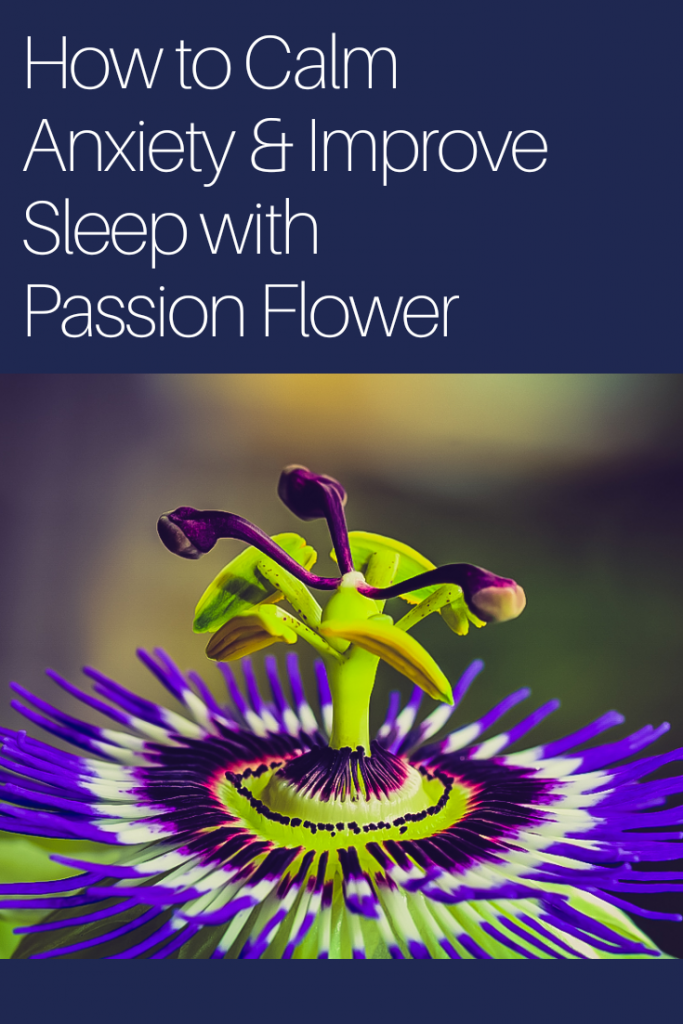