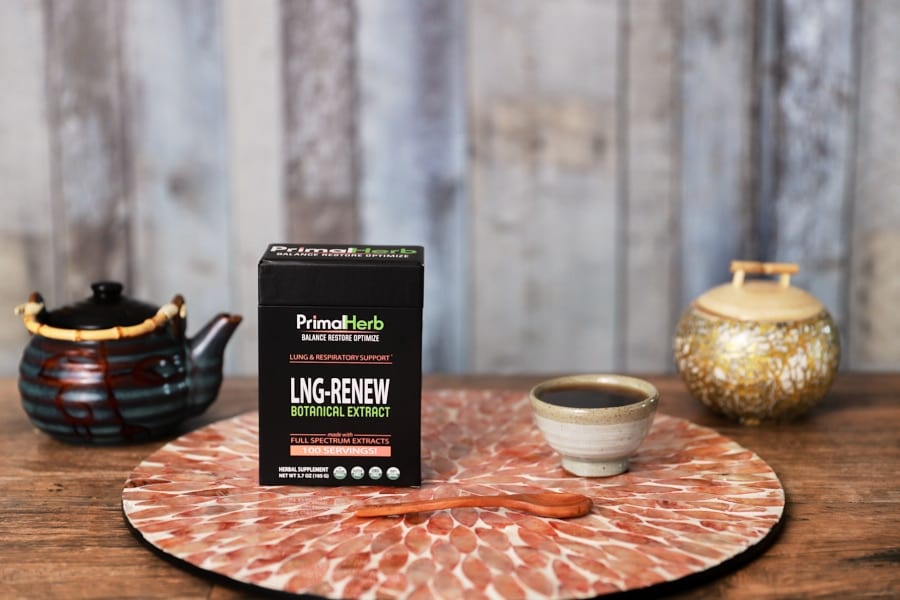 ✓ Reduce the risk of certain lung and respiratory cancers

✓ Soothe pain and inflammation in the lungs

EFFECTIVE, ALL NATURAL – PLUS A 1 YEAR MONEY BACK GUARANTEE!

My son has COPD and he can breath better than he has been able to for several years. Well worth the money.

So far so good
Verified Buyer

I have been using this about two weeks now.
I have mild asthma and just wanted to try this to see how it worked.

So far I notice I am taking my inhaler less.
Also the taste is good.
Honestly, it’s been a successful product for me so far- I’m going to look at what else they have!

As a singer, I have been using LNG-RENEW daily for approximately one month, and already see improvement in breath support and vocal quality.

So far I am very pleased with this product,I will order again and hope it continues to help me,thank you

Had Covid with bad congestion in lungs and your product helped with my recovery. 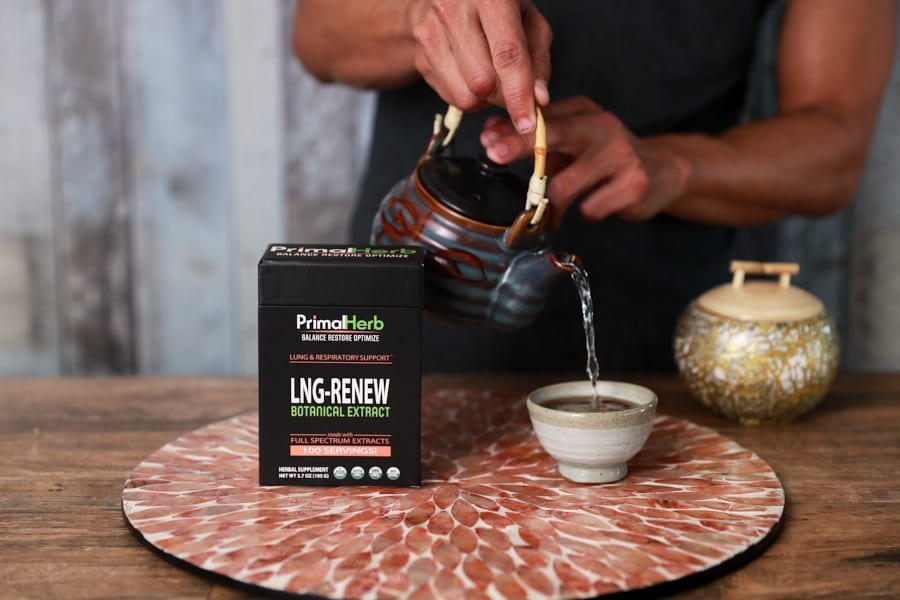 What do we put in our LNG-RENEW formula? Each completely natural addition is chosen for its proven effectiveness, safety, research, and historical use.

Mullen leaf provides powerful antioxidant and anti-inflammatory properties that help calm inflammation in the lungs. They also have antiviral and antibacterial properties to help fight off infections in the respiratory tract.

Elecampane helps with mucous suppression to make breathing easier. It also helps fight infections in the lungs, even those that do not readily respond to antibiotics. They also soothe pain and inflammation with strong antioxidant activity.

The common household plant actually contains potent properties for supporting lung health. It’s anti-inflammatory properties not only make it ideal for soothing the respiratory tract, but it can even help support gut health and fight off common bacterial infections. It expands the airways and helps relieve chronic cough.

Grown only high up in the Rocky Mountains, osha root has long been used by Indigenous cultures to help aid and support respiratory function. It is a potent antioxidant that helps calm chronic inflammation and may reduce the chances of the diseases that go along with it. It supports immune health as an immune modulator. It has also been shown to be effective against several strains of bacteria for overall immune health.

LNG-RENEW also contains organic black pepper extract to increase the bioavailability of the powerful compounds added to this blend – so you can feel the difference!* 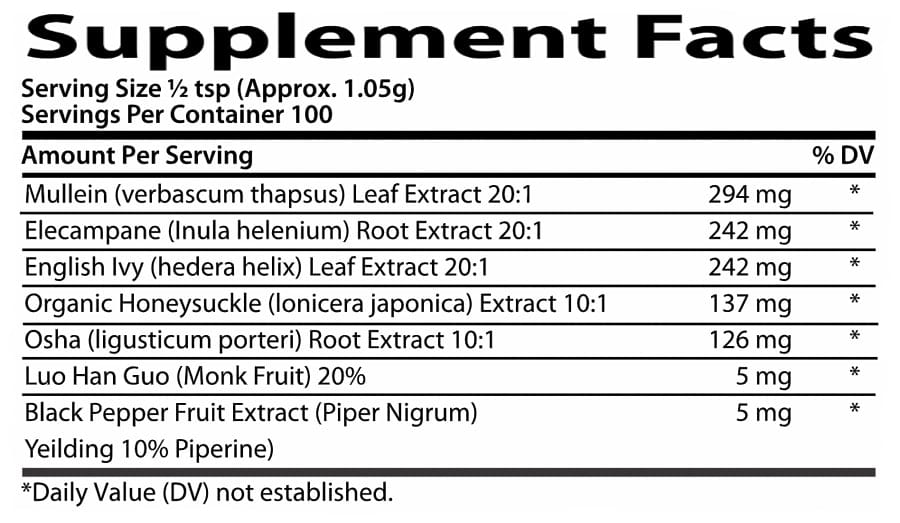 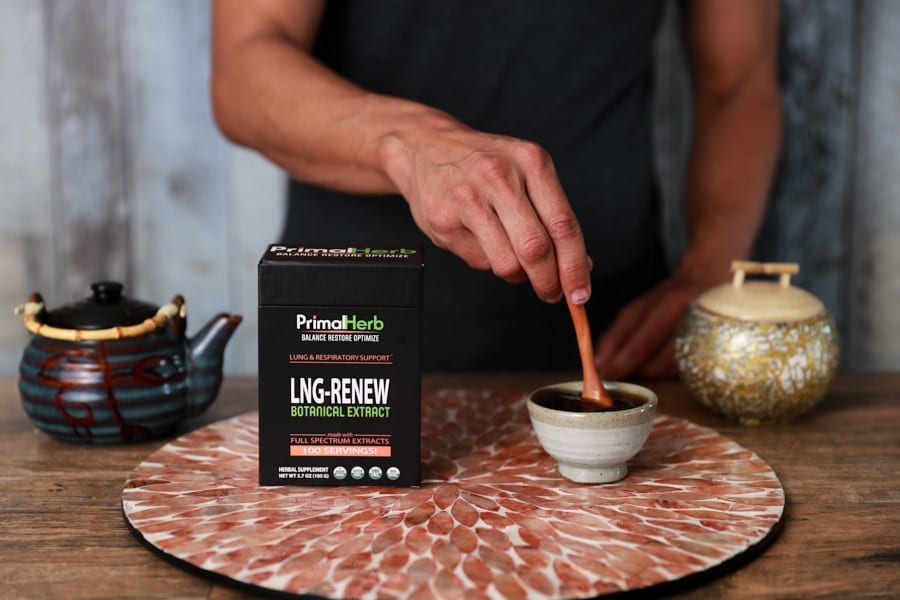 Our respiratory system is one of our bodies’ defenses against outside attacks. When we breathe in, our lungs clear out particles and pathogens and deliver fresh oxygen to our body. They are the guards, making sure that clean air gets through and nothing else.

Sometimes this system breaks down, though. We are exposed to a constant onslaught that makes our respiratory system vulnerable. It can fall prey to a number of problems, from infection to inflammation to cancer. Plus, the number of toxins and chemicals that we are exposed to makes our lungs more susceptible than ever.

Our respiratory system needs help. Thankfully, practitioners have known for thousands of years just the right herbs to help strengthen and sustain our lungs. We can use them to breathe deeply well into old age.

Today, we can use science to help substantiate what practitioners knew intuitively for thousands of years. We have been able to pinpoint the best herbs and supplements to strengthen the lungs. These herbs can also protect them from the damage of disease and our environment.

Whether it’s a chest cold, tuberculosis, MRSA, pneumonia, asthma, lung cancer, or some other lung ailment, LNG-RENEW can help. The supplements support lung function so we can breathe deeply, every day.

The towering flower stalk has been around for thousands of years in many parts of the world. Practitioners have long used the leaves in a tea to support respiratory function. They have also used them to fight against common pulmonary issues, including coughing, congestion, bronchitis, COPD, and asthma. It’s first documented use was over 2000 years ago for a pulmonary condition. It was even smoked by Indigenous tribes in North America to relieve respiratory ailments.

Current research supports the use of mullen leaf extract for healthy lungs. Studies show that the plant is full of antioxidants and other anti-inflammatory properties. Some of the antioxidants include:

These antioxidants are anti-inflammatory, antiviral, anti-tumor, and pain-relieving. Studies have also pinpointed these properties for relaxing respiratory pathways. They support the reduction of symptoms in asthma and tuberculosis.

Mullen leaf also has antiviral properties that can support defending the lungs against disease. One study found that it was effective against the flu virus. Another study found that it could effectively fight a virus in the herpes family. More research needs to be done to find out exactly what viruses it can help fight. The studies do demonstrate, though, its ability to fight infection.

Researchers have also discovered that mullen leaf also has antibacterial properties. Multiple test-tube studies have found it was effective against various strains of bacteria, including E. coli, Streptococcus pyogenes, and bacillus cereus. Science has only scratched the surface of its capabilities for fighting bacterial infections.

Elecampane goes by many nicknames, including Elfdock, Horseheal, and Yellow Starwort. It is native to Asia but spread to Southern and Eastern Europe, where healers have used it for thousands of years. The tall yellow flowers are in the same family as the sunflower and grow up to 8 feet tall.

Elecampane is notable for being mostly composed of inulin, a carbohydrate also found in burdock, dandelion, and Jerusalem artichoke. It is a soluble fiber that works as a prebiotic and aids healthy digestion and a diverse microbiome. A diverse microbiome is vital for a healthy immune system that aids the respiratory system and lungs.

Elecampane is also helpful in mucous suppression. It aids the removal of phlegm that can cause respiratory issues. Research has shown it to be effective in fighting against various staph infections, including the deadly MRSA that does not readily respond to antibiotics. It can be helpful to take along with traditional medical treatment.

While many people know of English Ivy as a beautiful plant that helps clear the air indoors, it also works as a powerful supplement. Even in ancient Greece, English Ivy was used to reduce swelling and as an antiseptic.

Today, science has found that it offers potent benefits to fight many conditions. Its anti-inflammatory properties make it ideal for supporting pulmonary health, improving gut health, and fighting bacteria. A survey of over 17,563 subjects found that it could be useful in reducing coughs, although more research needs to be done.

In adults, English Ivy is effective in treating coughs as well. One study showed that it was as effective as common cough medication for chronic bronchitis. English Ivy contains polysaccharides, a known demulcent. The properties have a soothing effect on the lungs.

Although researchers have not tested English Ivy on COPD, the same study above shows that it could be useful for that as well. In addition, another animal study also showed that it was effective in reducing mucous.

For many, the smell of honeysuckle brings back memories of late summer and the childhood memories of trying to suck sweet nectar from the flowers. However, beneath its sweetness is a powerful supplement that can help strengthen the respiratory system.

Honeysuckle has long been used in Traditional Chinese Medicine to treat inflammation, fevers, and upper respiratory infections. Although there are hundreds of species of honeysuckle, Japanese Honeysuckle provides unique properties that make it a particularly useful supplement.

Researchers have isolated more than 140 compounds in Japanese Honeysuckle that have broad implications as anti-inflammatory, antibacterial, antioxidant, and antiviral.

Honeysuckle aids immune health and helps fight viruses. It works as an immunomodulation agent, meaning it either raises or lowers the immune system as needed. That means that it is useful for an overactive immune system, such as with asthma or cancer. It also helps boost the immune response in other instances, such as with an infection or cold. In one 2018 study, researchers found that it has immune-boosting properties. Another study confirmed its immunomodulation effects.

Growing in the high regions of Colorado and New Mexico, osha root also goes by the names of Bear Root, Colorado Cough Root, and Mountain Lovage. As part of the carrot and parsley family, both Hispanic and Indigenous cultures have long used the root.

Osha root is particularly helpful because it is full of antioxidants. Oxidative stress can cause chronic inflammation and the various diseases that go with it. Osha root can help combat this with its potent antioxidant effects.

Osha root also works as an immunomodulator and either boosts or suppresses the immune system as needed. In addition, it’s antimicrobial effects can help protect against infection. Research shows that it is effective against bacteria, including staph infections, E. coli, and Bacillus cereus. 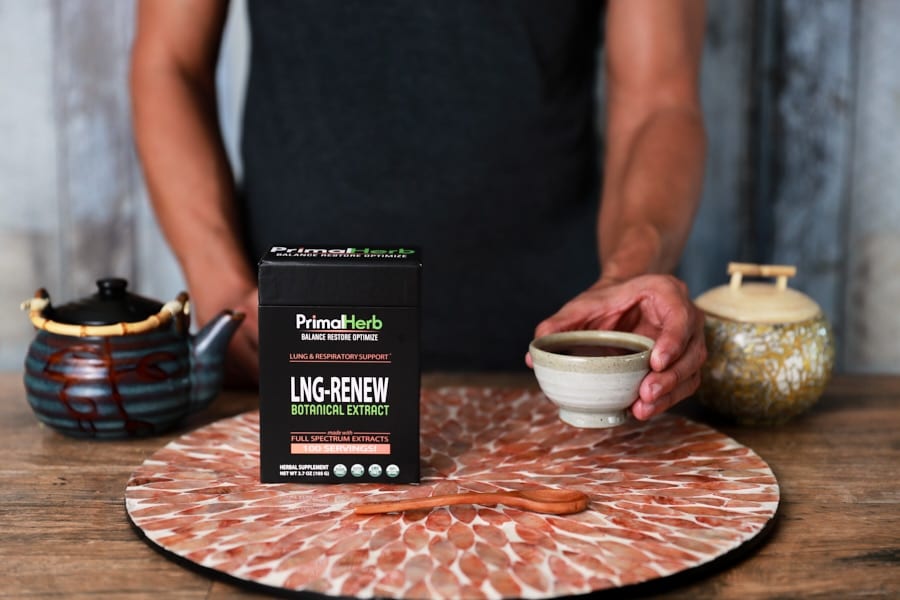 HOW AND WHEN TO USE LNG-RENEW

My son has COPD and he can breath better than he has been able to for several years. Well worth the money.

So far so good
Verified Buyer

I have been using this about two weeks now.
I have mild asthma and just wanted to try this to see how it worked.

So far I notice I am taking my inhaler less.
Also the taste is good.
Honestly, it’s been a successful product for me so far- I’m going to look at what else they have!

As a singer, I have been using LNG-RENEW daily for approximately one month, and already see improvement in breath support and vocal quality.

So far I am very pleased with this product,I will order again and hope it continues to help me,thank you

Had Covid with bad congestion in lungs and your product helped with my recovery.