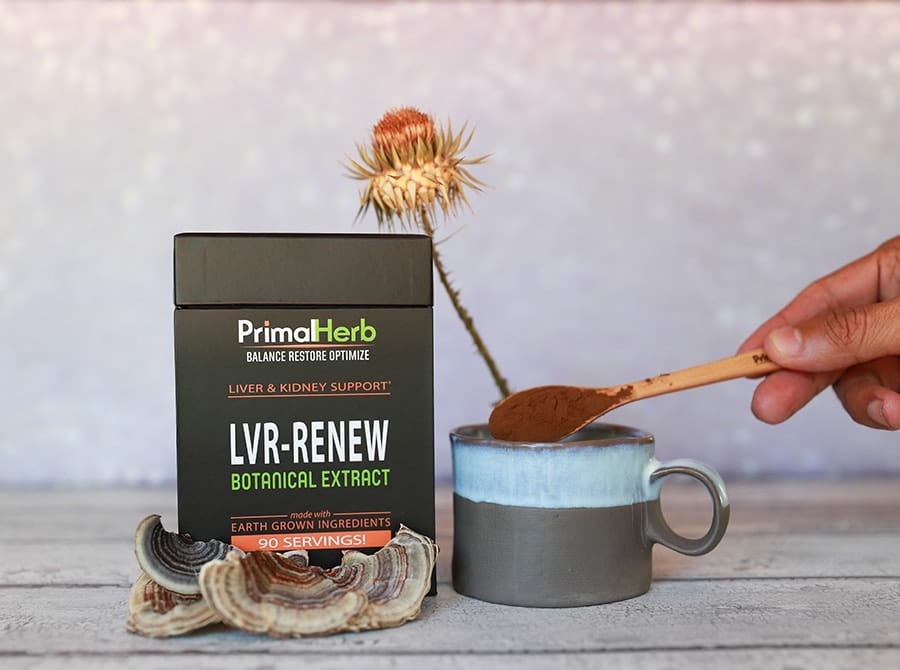 HOW LVR-RENEW MAY HELP YOU:

EFFECTIVE, ALL NATURAL – PLUS A 1 YEAR MONEY BACK GUARANTEE!

Drinking mine right now and also mixed in LNG-Renew as well. So good! Thanks Primal Herb! 🤗❤️

I’ve been drinking this for 3 days and already feel more normal. No bloating and I’m able to eat more than 2 bites of food. Miracle. Felt Better the first day

I use the LVR RENEW every morning. I mix it in my tea. 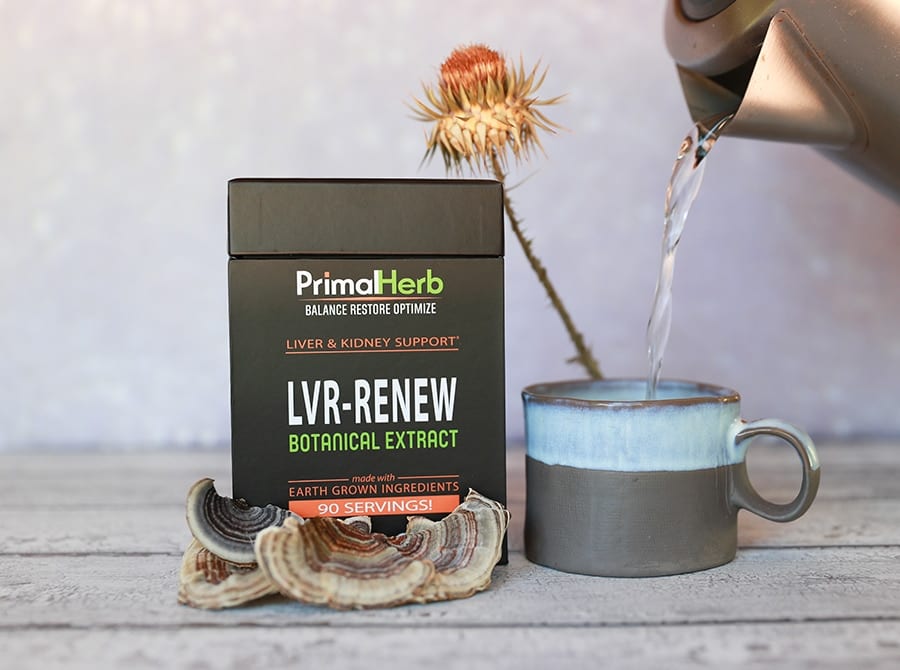 EACH INGREDIENT MUST HAVE HISTORICAL USE & INDEPENDENT STUDIES!

What exactly goes into our LVR-RENEW formula? Each completely natural addition is chosen for its proven effectiveness, safety, research, and historical use.

addition because of its proven effectiveness, safety, research, and historical use.*

Cracked Shell Reishi Spores
The most potent preparation of reishi! It is included for yet more optimal liver protection and restoration. Reishi also raises and balances immunity, while lowering cancer risk. It helps heal liver damage and may help reduce the chances of a fatty liver from a poor diet. The spores also support the kidneys and help stop the toxins that can damage them.

Milk Thistle
Amplify liver recovery! Milk thistle speeds the healing of any liver damage, rejuvenates liver cells, and brings function back to normal. It protects against all manner of liver illnesses and issues. When used alongside dandelion root, it creates optimal support for the kidneys. The powerful compound in milk thistle, silymarin, is even shown to help fight precancerous activity in the kidneys.

Poria Extract
A liver and kidney-qi tonic of the highest degree! We added poria based on its strong traditional background for helping both the liver and kidneys. Research also reveals it to be a protective antioxidant and anti-cancer mushroom of epic proportions.

Schisandra Extract
Get great mood, energy, and immunity back with the addition of Schisandra to the blend. Schisandra is also an invaluable herbal ally to the liver and kidneys. Protect against free radical damage and accelerate the healing of any current damage or stress with Schisandra.

Dandelion Root
If digestive function is also in limbo along with a struggling liver and kidneys, dandelion has it covered. The bitter qualities encourage successful regularity and promote healthy liver cells. It may also help against fatty liver and other sorts of liver damage while aiding the liver’s natural detoxification processes as a gentle diuretic. Its diuretic effects support kidney health and helps protect from kidney damage.

Licorice Root
Licorice sweetens the deal with its added immune support and hormone balancing capabilities. It also directly protects the liver and kidneys and has been proven in research to help speed healing to both organs.

LVR-RENEW also includes piperine, the active alkaloid chemical found in the rinds of black pepper fruits (or corns). This compound immediately increases the bioavailability of all other potent plant compounds added to this blend – so you can feel the difference!*

WE ONLY CULTIVATE & HARVEST THE PUREST SOURCED BOTANICALS 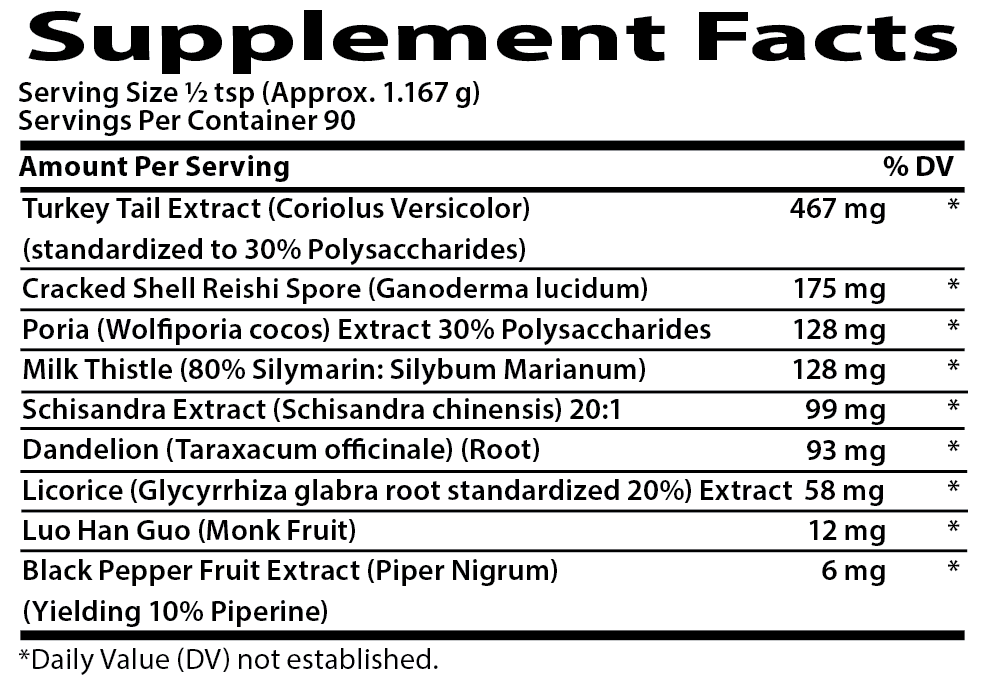 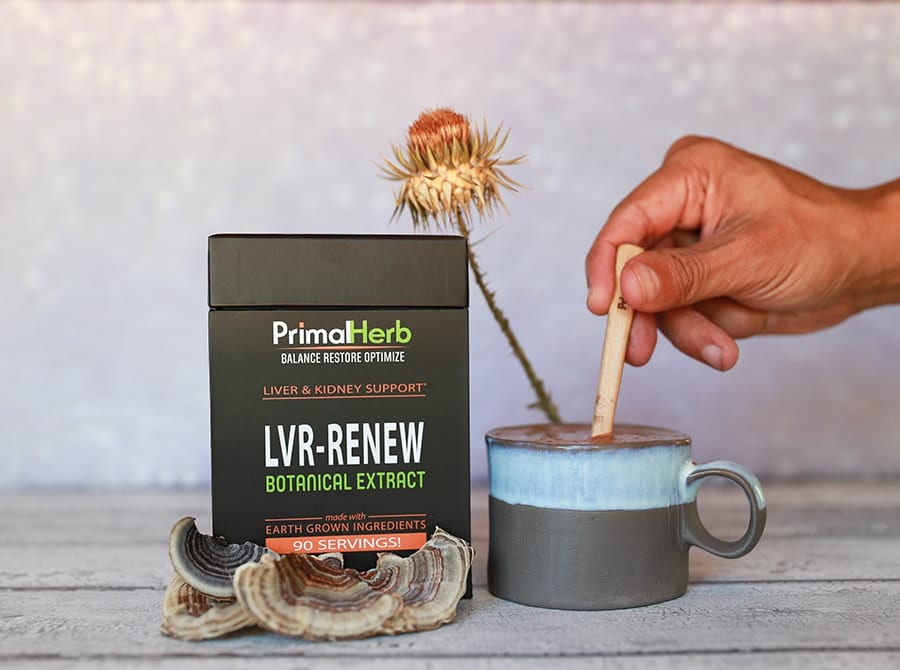 RESEARCH BEHIND THE HERBS THAT DELIVER FOR THE LIVER (AND KIDNEYS)

The secrets of a healthy liver and kidneys have been around for centuries. Practitioners have long used certain herbs to help detoxify, strengthen, and heal both organs.

In ancient traditional folk medicines, these plants were often called “blood cleansers.” They were thought to help filter and clean impurities from the body and bloodstream. In effect, these herbs helped the liver to do its job.

While they did not have the science to know exactly what was going on, they witnessed the restored health and wellbeing of their patients.

Science has since found that their ideas were not too far off when it comes to aiding the liver. After an in-depth look into the research of many botanicals, we’ve chosen the very best to pack a healthy punch for the liver and kidneys. We included them as a potent line-up in our LVR-RENEW formula.

There are many healing fungi around the world, but none are eye-catching like the turkey tail mushroom. Experts sing the praises of its scientific benefits, which include immune-boosting capabilities, anti-viral potential, and more.

The fungus is common: you’ll find it growing on trees just about anywhere! However, it has incredible properties to improve liver health. It has health benefits comparable to other health-boosting mushrooms like Chaga and cordyceps.

What more, recent studies on the fungus have begun to peel away the mystery of how it helps the liver. A 2010 study found turkey tail killing tumor cells in the liver.

Later, in a 2011 and 2012 study, respectively, polysaccharides extracted from the fungus were observed protecting the liver from the harmful effects of cancer radiation. With liver protection like this, the worst wellness issues can be healed and held at bay: including fatigue, digestive issues, skin problems, and more.

Turkey tail’s inflammation-busting compounds are also helpful in protecting the kidneys. Kidney inflammation is one of the common causes of kidney disease.

The reputable reishi mushroom is perhaps best known for its ability to boost immunity. Since ancient times, it was hailed as a heal-all tonic that remedied all kinds of ailments.

Part of its immune-boosting capabilities may be rooted in some liver protection potential. Many studies have been undertaken to explore and establish a genuine connection between reishi and the liver.

For example, a 2012 study found that extract from the mushroom could protect, treat, AND potentially reverse a fatty liver. Research in 2013 saw that reishi quickly healed and protected against liver damage. Also, a study in 2014 showing that reishi rapidly sped the healing processes of wounded livers.

With reishi working together with our other star mushroom in our LVR-RENEW blend (turkey tail), liver health will be at its finest.

Liver healing is not exclusive to the world of medicinal mushrooms. Milk thistle, a common yet unassuming plant, may in truth have much of the entire fungal world beat! The seeds of the spiny plant (a distant relative to lettuce) contain compounds called silymarins, which are very formidable antioxidants.

They are strongly protective of the liver. In fact, a 2010 study found milk thistle was competitive against pharmaceuticals in reducing the chance of liver damage. A review in 2015 went on to connect all the liver research on milk thistle. Researchers concluded that there was science to promote its benefits, including liver protective, regenerative, antioxidant, and anti-inflammatory.

When paired with dandelion root, milk thistle has amazing potential for kidney protection. It has been studied extensively for its many kidney-boosting benefits.

It was found in a 2012 placebo-controlled, double-blind study to help reduce kidney damage due to type 2 diabetes. A 2016 study found that it supported kidney function to assist the detoxifying process. Another study found that it helped reverse some of the effects of drug toxicity. A study from 2010 even found that it assisted in suppressing precancerous activity in the kidneys.

The herb is almost synonymous with liver health in both the world of research and traditional herbal practices. We absolutely couldn’t exclude it from the line-up of liver healers in our LVR-RENEW formula!

The poria mushroom does not have as much scientific claim to fame as other mushrooms, like maitake or lion’s mane.

But, very much like its fellow fungi, it has been a favorite go-to for improving health in Traditional Chinese Medicine (TCM). The round, coconut-like mushroom was a mainstay in TCM for helping to strengthen the liver with success. In fact, it is still used in practice today.

Studies, like this one in 2013, are establishing it as valuable with its antioxidant, anti-inflammatory, anti-tumor, anti-diabetic. It even has anti-depressant capabilities that provide some benefits to the liver.

Poria has also been used by ancient practitioners to support the kidneys and urinary tract. A study from 2013 found that it worked as a diuretic and supported kidney metabolism and function. Another study from the same year discovered its antioxidant effects helped fight chronic kidney disease. A study from 2007 found it helped reduce the chances of the most common type of kidney stones.

Poria may very well be a medicinal mushroom that will soon blow up in popularity like other mushrooms have. We’re so impressed by the evidence-based liver wonders poria has performed, so we couldn’t resist adding it to LVR-RENEW.

Schisandra is better known for boosting immunity, raising energy, and regulating mood. The adaptogenic berry should also add its liver benefits to its list of well-known benefits!

Research (especially very recent research) is quite plentiful, establishing its liver-boosting effects. A 2010 study, the berry was observed speeding liver recovery after a liver transplant.

Not to mention, a 2013 trial found that schisandra’s antioxidant qualities were enough to help protect the liver from damage.

Researchers have also found that it can be powerful in maintaining kidney health as well.

One study from 2013 showed that it even helped halt kidney damage in some cases. Another study found that it helped to support kidney health.

With our inclusion of Schisandra in LVR-RENEW, we don’t only add even more organ-healing properties. We also add the five-flavored berry’s innate immune, stress, and energy restoring qualities as well!

Most people would see a dandelion and immediately want to yank it out of their yard or garden. But if they knew about its amazing health properties, they would most likely reconsider doing that!

In dandelion’s homeland in Europe, the yellow flower was the true liver “blood cleanser.” It is a detoxifying tonic and bitter digestive stimulant to help get a sluggish liver moving forward again.

Now, researchers have identified that the dandelion is capable of this and so much more!

A 2013 trial found that dandelion leaf extract (which is less potent than the root) alone helped both help reduce the chances of and treat fatty liver. That same year, another study showed that dandelion helped restore function and heal damage in livers with cirrhosis.

There is also research that shows its ability to protect the kidneys as well. A review of the active ingredients in dandelion found that it has diuretic effects. These effects can help deter kidney infection, and even help reduce the chances of kidney stones from forming. Another 2016 study found that it helps support the kidneys when paired with milk thistle.

Still don’t like dandelions in the garden? They might be much more appreciated in LVR-RENEW. It is one of our favorite organ-healing herbs, and our chosen blood cleanser and detoxifier in the formula.

Last but not least: licorice is a popular favorite among all kinds of herbalists from all over the world. It’s usually associated with its immune powers to fight colds, coughs, flu, and viruses. Not to mention, the root has amazing abilities to balance the thyroid and restore energy.

But is it helping the liver? This sweet root is not so well-known for that, though recent research may change this soon enough. A study in 2011 already shows that it protects the liver as an antioxidant in marine subjects.

The next year, a 2012 study found mammals experienced liver healing and protection when taking licorice. Including licorice in our formula helps ensure liver health at a phytonutrient level.

The active compounds in licorice can also help promote kidney health. Researchers in one 2014 study found that one of the compounds, glycyrrhizin, helped stop injury and damage of the kidneys. 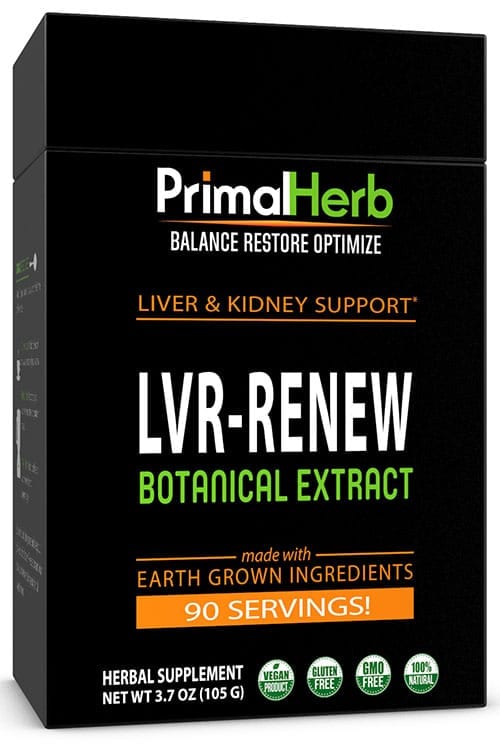 HOW AND WHEN TO USE LVR-RENEW

Drinking mine right now and also mixed in LNG-Renew as well. So good! Thanks Primal Herb! 🤗❤️

I’ve been drinking this for 3 days and already feel more normal. No bloating and I’m able to eat more than 2 bites of food. Miracle. Felt Better the first day

I use the LVR RENEW every morning. I mix it in my tea.