Herbs can be powerful tools for health.

Over time, research has revealed certain botanicals to have numerous benefits.

Plants like schisandra, rhodiola, and he shou wu are great examples—but turning to just one herb isn’t likely to cover all the benefits someone might be looking for.

What herb could be best for energy, athletic performance, even enhancing the faculties of the mind? In our opinion, it may very well be Siberian eleuthero.

WHAT IS SIBERIAN ELEUTHERO?

Siberian eleuthero: it’s an herb with an excellent reputation in Asia.

Siberian eleuthero is a shrubby-looking plant yielding dark blue-colored berries. It’s these berries that are used for its powerful medicinal properties.

One of its nicknames, Siberian ginseng, is an apt descriptor of its potential.

What can an herb like Siberian eleuthero do for wellness? Both research and history alike show it has many, many benefits and is truly a force to be reckoned with.

The following are 15 of its top-reported health properties.

More than anything, Siberian eleuthero is best known as a powerful source of fuel and energy to stop tiredness in its tracks.

Many studies have helped uncover and support this, including this major review, citing energy-boosting effects from the herb following aerobic exercise and due to the metabolic impacts. Because of this, many people seek it out—long shift and night workers, hard laborers, and most notably these days (with its increasing popularity), athletes.

Energy-boosting has obvious value to the average athlete. But according to research, there’s a bit more to Siberian eleuthero and boosting athletic performance than simple energy.

How far does the herb go to help physical performance?

According to this 8-week long study on human athletes, the use of the herb not only raised energy but also boosted metabolism, increased endurance, and supported healthy heart function in response to exercise, overall enhancing physical performance in these subjects.

Of note, too: the study was double-blind and placebo-controlled, demonstrating in no short terms that it was Siberian eleuthero that was responsible for these benefits.

What’s also remarkable about Siberian eleuthero: it appears to boost energy overall, not just strictly in a physical sense. It also appears to enhance mental concentration.

This includes cognitive function, learning, focus, and even memory.

Combining its abilities to lift energy and boost mental faculties, people who take it report what noticeably feels like heightened mental energy. But are these effects proven by science?

This study comes closest to proving such benefits, tracing them to active constituents found in the Siberian eleuthero plant (called eleutherosides). According to this research, it improved fatigue, reduced forgetfulness, and helped memory in aging test subjects.

While memory and cognition can certainly have their effects on mental function, nothing taxes the mind more than stress.

A stressed mind in and of itself suffers to function in the ways listed above.

If that’s the case, then in an indirect (or even direct) way, can Siberian eleuthero help the mind as it deals with stress (and to a certain extent, can it also naturally help anxiety)?

A study like this one suggests that yes, it might. In a test subject induced to experience significant stress from high amounts of corticosterone (a stress hormone), the use of Siberian eleuthero helped protect the nervous system from stress’s effects and lowered anxiety. It also had a mild anti-depressant effect.

Which brings us to the next possible benefit of Siberian eleuthero: can the herb help fight depression naturally, too?

Though more studies are needed, evidence points to the answer “yes.”

And if the previous study on stress isn’t enough to depict some type of depression-fighting capabilities in eleuthero, then other studies might be able to pick up some slack. This includes this study, where depressed test subjects appeared to benefit from an herbal extract of the plant. It seemed to work mainly by way of positively influencing the brain’s neurotransmitters.

Speaking of neurotransmitters (and everything neuro-related): research suggests Siberian eleuthero could be an overall protector of the nervous system—or, more specifically, a neuroprotector.

Many studies, including this one, showed neuroprotective abilities in the herb.

Besides all the benefits described above (improved memory, stress relief, and better mental energy), this means that Siberian eleuthero may reduce the risk of neurological disorders like Alzheimer’s, Parkinson’s, dementia, and many others.

It may seem like this Asian herb has benefits mostly for the mind, energy, and nervous system. Does it go beyond that?

Most certainly, especially when it comes to metabolism.

This study shows that using Siberian eleuthero helps the body metabolize fats much easier, including cholesterol.

Though more studies are needed to clarify exactly how this works—and how well—this suggests that, in addition to boosting athletic performance, eleuthero may be an excellent choice herb for naturally supporting a healthy weight and metabolism.

Since this relative of ginseng is known (and partially proven) to support metabolism, there are quite a few possibilities for it having natural benefits to type 2 diabetes, too.

Like its benefits for memory, this ties in with its compounds: eleutherosides.

In one study, these compounds were found to help lower blood sugars and increase insulin resistance, both of which can help naturally support diabetes—while also reducing one’s risk of getting it.

It’s certainly no replacement for diabetic medications whatsoever. But with more research, it could someday be proven very helpful for the disease.

Like many healing herbs and mushrooms before it, Siberian eleuthero is a great wellness protector in one very simple way: it is an antioxidant.

This means that the herb can scavenge free radicals and protect the body.

It also means that it could help one age more gracefully, too, if taken over a long time. Eleuthero’s antioxidant activity was confirmed in this study, indicating that on a very fundamental nutrition level, the Asian herb may help shield tissues, organs, and systems from illness, degeneration, and the long-term effects of aging.

Siberian eleuthero is shown to have anti-inflammatory effects, too. This can make the herb an excellent fighter against conditions involving chronic inflammation—possibly including autoimmune disorders.

This inflammation-fighting quality also adds to its value as a simple daily herb.

Taken as a tonic or supplement, Siberian eleuthero—according to studies like this one— may help keep inflammation of all types down and in all sorts of tissues. It could be holistically beneficial for allergies, though more studies are needed.

GREAT FOR THE IMMUNE SYSTEM

How about a little immune boost—can Siberian eleuthero help? Because the herb has both anti-inflammatory and antioxidant activity, answers point to yes—and studies do, too.

One interesting study tested the herb’s immune boost through probiotics.

The result: The addition of the herb with probiotics stimulated the immune system to work better in test subjects, and thus helped them better-overcome illnesses caused by invading bacteria and pathogens.

Because it can help boost immunity, this Siberian herb may be good for fighting (and reducing the risk of) colds and flu. After all, ramping up immunity naturally is one of the best ways to keep these viral illnesses at bay.

But this close relative of ginseng may have another card up its sleeve.

Not only might it help directly fight colds, flu, and other viruses, studies also show it may help suppress coughs, with the help of (and in combination with) other healing herbs.

Not too many herbs can claim to be good for bone health. But in the case of eleuthero, research suggests this botanical may be an excellent supplement to pop on the daily for keeping one’s bone health in tip-top shape.

Such results (like in this study) heavily imply Siberian eleuthero may be a great holistic supplement for slowing (or reducing the risk of) bone illnesses like osteoporosis, though more studies are needed.

If it’s good for immunity and good for inflammation, then it’s very likely that Siberian eleuthero is an excellent natural remedy for digestive health, too.

The research is certainly there to back up eleuthero’s gut-boosting prowess.

Such as in this study: an extract of the ginseng-like herb was used on test subjects. The results showed that it helped strengthen gut immunity, inflammation, and the digestive systems’ responses to stress.

Combined with probiotics, using Siberian eleuthero could pack a powerful punch for gut health in the long run, and needs further exploration in research.

Is it possible Siberian eleuthero could play a part in keeping one of the deadliest diseases in the world—cancer—at bay? Thus far, studies seem to be proving it true.

As of yet, it is still unclear how the herb helps fight cancer.

All the same, studies like this one show that this botanical can encourage cancer cells to stop spreading, and in some cases, to even destroy themselves—thus slowing cancer development and also supporting cancer therapy.

It’s far from being a cancer remedy, that’s for sure. But in the future, Siberian eleuthero could be a goldmine for cancer research.

The best ingredients, like Siberian eleuthero, aren’t best experienced alone. Though powerful, eleuthero is better taken with help from other energy boosters! 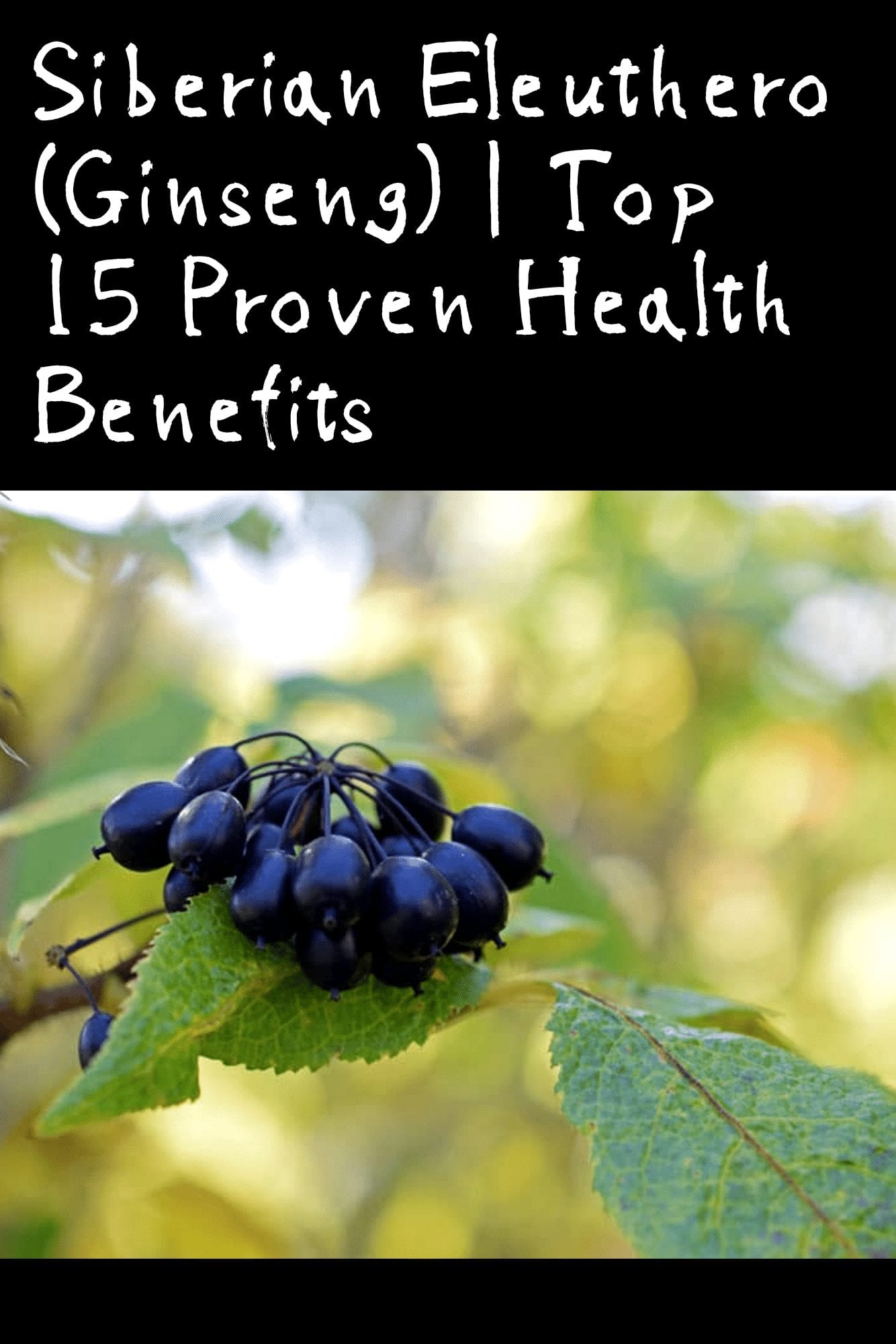