There are thousands, if not hundreds of thousands, of herbs and mushrooms used or experimented with for healing throughout history.

In some traditional cultures today, almost all are still used for health. Other botanicals, on the other hand, have risen to prominence for the amazing feats for wellness they can accomplish.

Some have such visibly effective powers, they’ve gained worldwide appeal in mainstream medicine —  even for illnesses like cancer.

Today, many of our widely-used, most beloved and globally-known supplements are made from these such herbs. Of these, reishi may be one of the very best for potentially supporting cancer. 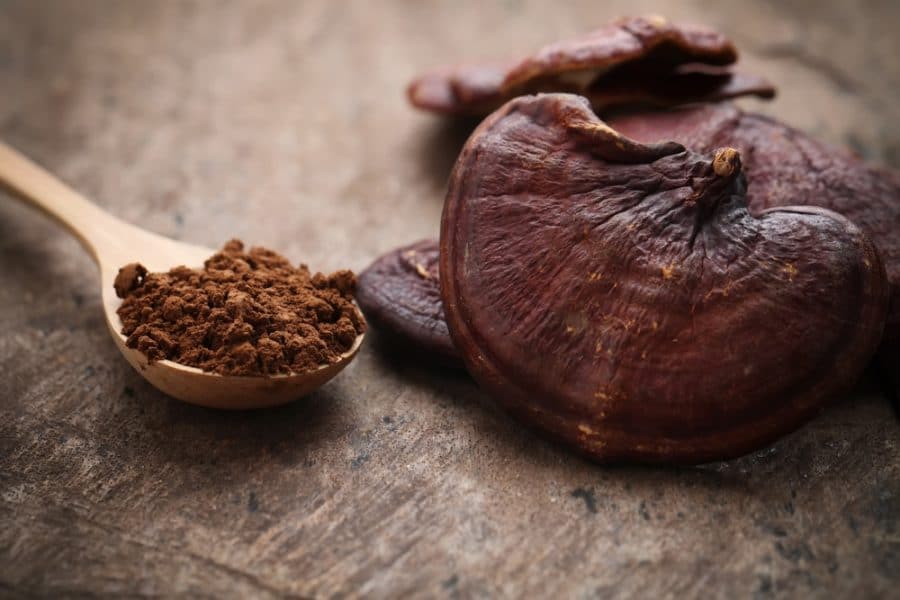 WHAT IS REISHI MUSHROOM?

Mushrooms known as “reishi” belong to the genus Ganoderma. They’re found all over the world, though they’re most common in many parts of Asia as well as North America.

These mushrooms can grow quite large and exhibit a warm array of colors.

Reishi can be red, maroon, mauve, golden, orange, or multiple colors. They are also a shelf fungus that, when touched, can feel as hard as nails.

Despite its beauty and hardness, ancient cultures were curious enough to experiment with reishi as medicine. As it turns out, preparations of reishi mushroom could restore many ails, and possibly help with cancer.

Beyond helping reduce the risk of cancer or supporting cancer treatment, reishi was known throughout history for many other things.

Ancient cultures consumed it as a tonic or supplement much like we do with the mushroom today. Instead of in supplement pills, powders, and capsules, reishi was brewed into teas, broths, or other preparations—sometimes even into foods.

Cultures that consumed it as medicine viewed reishi as a powerful health tonic.

Nowadays, this still rings true by the fact that reishi is considered an “adaptogen” today: a health tonic that strengthens overall health and reduces the chances of disease, including cancer.

REISHI COULD REDUCE RISK OF CANCER: TRUE OR FALSE?

Reishi’s health-strengthening properties of the ancient past have translated into benefits people can seek in the modern world today. What’s more, the words “cancer” and “reishi” have often been seen together in the health world.

Is it true that reishi could really help rectify cancer?

Our best answer: there is no medicine yet discovered or developed that can be called a failsafe cancer remedy. That goes for mainstream medicines as well as herbal and mushroom medicines, too.

What reishi shows is amazing potential to holistically and naturally support and reduce the risk of getting cancer.

SCIENCE AND RESEARCH SEE POTENTIAL IN REISHI, TOO

Reishi could holistically support cancer. But what does this mean exactly?

True to reishi’s adaptogenic and tonic nature, this means it can support the body’s ability to fight and deal with cancer.

It’s not a magic pill that immediately gets rid of the illness or remedies it entirely. But it can support one’s ability to handle it in some ways, which is a benefit recorded from healers in ancient times.

Even better, it’s also a benefit that many scientists and researchers are seeing great potential in. In fact, reishi is the subject of plenty of cancer research.

HOW DOES REISHI HELP REDUCE RISK OF CANCER?

Though it’s not considered a remedy or even an approved treatment (or therapy) quite yet, reishi is nevertheless known to help cancer in some way—whether by reducing its risk or supporting people who are dealing with the illness.

But here’s the truth of the matter: science shows lots of evidence of this, but also shows reishi could do this in a myriad of different ways.

What makes reishi so great for cancer? More importantly, what makes this woodland mushroom the subject of so much research, including studies aiming to use reishi extracts for possible cancer medicines?

The following are the most promising benefits discovered about reishi to date, and how it could play a role in reducing the risk of cancer or supporting the battle against it.

REISHI IS AN ANTIOXIDANT

Turns out, reishi’s potential for helping cancer falls on every single point of the spectrum: all the way from risk reduction to, possibly one day, even restorative.

Here’s one-way reishi could be a nutritional “risk-reducing”: it’s rich in antioxidants.

As most who are passionate about health know full well, having a diet rich in antioxidants (as well as other nutrient-dense foods) can be one of the best ways to reduce one’s risk of getting the illness, which can all too often be life-threatening.

Besides cancer, reishi is famous for another major benefit in the health world: naturally enhancing the immune system.

People might not realize this is yet another great benefit reducing cancer risk.

A strong immune system doesn’t just fight off things like colds and flu. It can also take part in protecting the body against many things that could invade and thus get cancer started.

One study in 2012 on a Ganoderma species showed not only might it help people age more gracefully, it does so by strengthening the immune system. This benefit also appeared to be tied to antioxidant actions.

REISHI IS IMMUNOMODULATORY TOO

There’s something even more special about reishi’s immune properties. Apparently, according to studies, reishi mushroom is also immunomodulatory.

This means reishi has more of a “balancing” than a “stimulating” effect on the immune system, which can make it beneficial to more people.

It’s not always beneficial for medicines to just increase immunity rather than balance it. In some people with certain cancers or cancer risks, this can actually encourage cancers to spread faster.

It can also mean that people with autoimmune diseases are hopeless for fighting cancer by strengthening the immune system.

But chronic inflammation can also cause cancer.

Too much chronic inflammation, which can be triggered by free radicals, poor diet, and more, might also damage DNA in tissues. When this happens, it opens the door to cancer and other unhealthy dysfunctions.

Luckily, mushrooms like reishi have been shown to naturally combat chronic inflammation, which was shown in this 2015 study and many others. This is another way science shows that reishi can be a whole-health protector, which in turn can reduce cancer risk holistically.

What’s most interesting about reishi: as stated earlier, it doesn’t just function like a risk reducer.

It also shows restorative potential for cancer, though more studies are needed before we can call it a remedy or treatment.

This can be seen in studies like these where reishi mushroom had direct anti-tumor effects. It literally encouraged the shrinking of tumors, decreased their cell count, and also overcame and suppressed tumor cells that were resistant to treatment, including chemotherapy and radiation.

It’s research like this that draws so much attention to reishi. It shows great possibilities in the realm of more natural cancer medicines.

Besides fighting and shrinking tumors, reishi demonstrates another weapon in its cancer arsenal: its anti-proliferative properties.

This means it can stop cancer from spreading and spreading quickly.

That’s right: studies have even shown reishi could be very useful in keeping “metastasis” from occurring in cancer. Metastasis means cancer spreading that can quickly get out of control, and possibly even threaten life, and which should be avoided at all costs.

A study in 2013 also showed this to be true about reishi. Though it shows anti-proliferative effects, however, it still needs more research before being called a cancer medicine or remedy.

Last but not least, research suggests reishi may be the nail in the coffin for cancer in some ways. It reduces cancer spreading, shrinks tumor cells, and as seen in a study like this one, it can trigger a widespread bodily process where cancer cells die in a cascading effect.

This effect is called “apoptosis.”

In simpler words, reishi can trigger cellular death in cancer, which in a way is the opposite of metastasis: it’s a sign cancer is being overcome.

While this sounds a lot like “cancer remedy,” more research is needed before calling reishi a remedy in this way, too.

For those fascinated by health at the cellular level (and who are especially interested in mitochondrial health), here’s double good news if reducing cancer risk is at the top of their list of health priorities.

This is because studies show reishi is a healthful mushroom that can stimulate autophagy.

For those who don’t know, autophagy is a natural “switch” in the body that can be triggered by the right diet, lifestyle, habits, and healing herbs. Switching it on improves the body’s ability to clean up and “downsize” waste that can eventually lead to DNA damage and open the door to cancer risk.

WHAT CANCERS ARE REISHI SHOWN TO SUPPORT?

Research is bountiful in showing the many ways reishi could help cancer.

It could reduce its risk when taken daily as a nutritious supplement or antioxidant. Or, it could potentially support the direct fight against cancer, or even support treatment for the illness, though more studies are needed on this.

But can reishi help any type of cancer?

It’s not confirmed yet, but it does appear that reishi could be effective against the most common cancers known, and there are plenty of studies covering many different types of cancers. Including:

OTHER STUNNING BENEFITS OF REISHI MUSHROOM

Cutting down cancer risk and supporting treatment is only one benefit of the wonderful reishi mushroom.

If taking reishi to reduce risk or support treatment of the illness as an herbal supplement, there are tons of other benefits to be experienced, such as:

TRY OUR HERBAL FORMULAS WITH REISHI 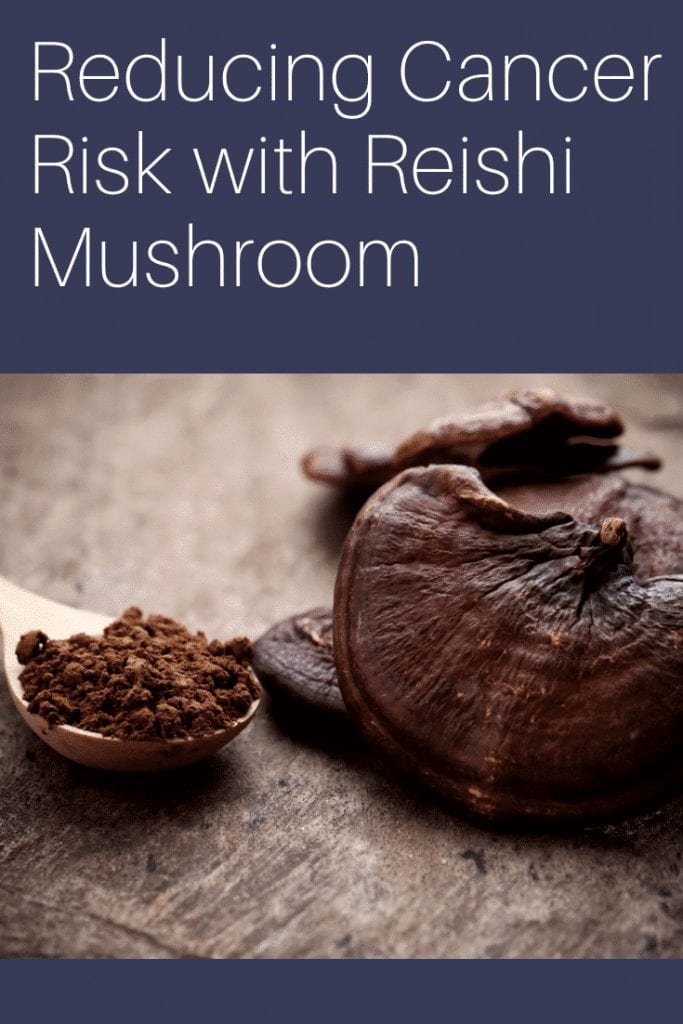