When it first sets in, it may not feel like much to most—though everyone experiences it differently.

For some, it might feel like a mild fever, as with colds or flu. For others, it can include this and a multitude of other symptoms: joint pain, inflammation, rashes, headaches, fatigue, and much worse.

It’s an illness that can be difficult to differentiate from other illnesses.

During a health check-up, doctors may not diagnose it right away (or misdiagnose it) because it seems more likely to be another disease. Or, because symptoms come and go impermanently, it’s hard to pin down its nature—or even accept that it’s an illness in and of itself.

If these are common symptoms in one’s life (or in a loved one’s life), it may be the inflammatory disorder, lupus. 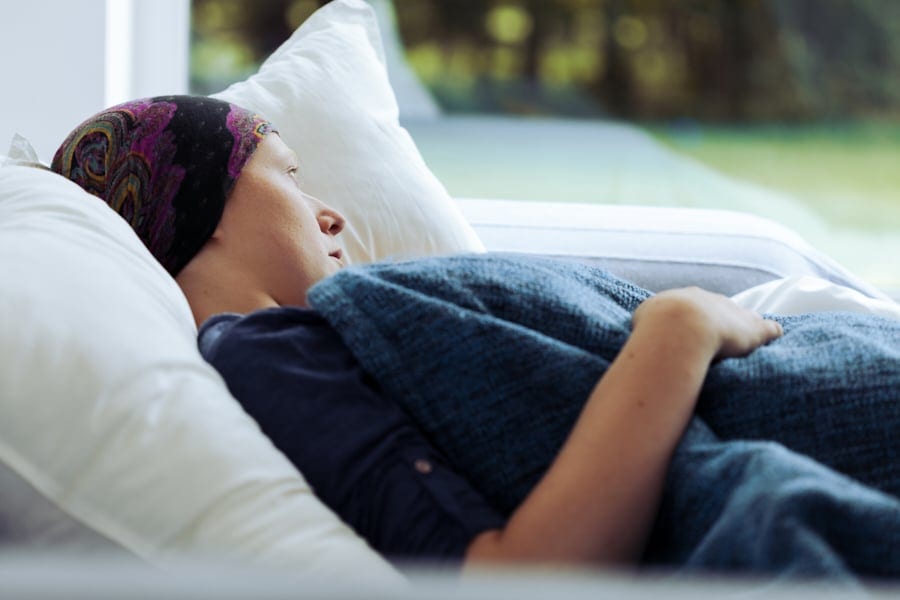 WHAT IS LUPUS? HOW IT WORKS

Lupus is an autoimmune condition. This means it’s a dysfunction of the immune system where the body mistakes its own tissues as foreign invaders and attacks them, causing painful chronic inflammation and other problems.

There are many types of autoimmune conditions.

These all work the same way as described above, but they manifest differently. Rheumatoid arthritis, multiple sclerosis (MS), and even most thyroid disorders are examples.

In the case of lupus, the inflammation can affect many different tissues. The immune system may get confused and attack organs and systems like the brain, heart, kidneys, skin, lungs, or even blood cells.

For every individual who gets it, it can be different and difficult to track. Generally speaking, the most common symptoms of lupus may be:

CAN HERBS AND MUSHROOMS HELP LUPUS?

Once lupus is successfully detected and diagnosed, it, unfortunately, cannot be completely remedied—much like all autoimmune illnesses.

But lupus can be supported and managed.

Often the condition manifests sporadically as “flare-ups.” With the right diet and lifestyle tips, accompanied with regular guidance from one’s doctor, flare-ups can be reduced and even the severity of symptoms minimized.

In addition, people diagnosed with lupus can turn to anti-inflammatory, immune-suppressant, or biologic drugs to seek treatment and relief when experiencing flare-ups—though some of these may have unwanted side effects.

Can natural home remedies, like herbs and mushrooms, help holistically?

Though they shouldn’t replace doctor’s recommendations, studies suggest that yes, certain herbs and mushrooms indeed can support lupus— when used as holistic, immune-supporting remedies at home, and if approved by one’s healthcare professional.

The following number among the most research-supported botanicals for supporting lupus and autoimmunity, paired with historical and traditional use over time.

An Ayurvedic tonic useful for many ailments, the Indian herb ashwagandha is today considered a powerful supplement, useful for issues ranging from anxiety all the way to boosting immunity.

Because of its immune powers, it’s a fitting remedy and support for lupus.

Ashwagandha has a reputation in the natural healing world for supporting autoimmune and thyroid issues. But can its immune and anti-inflammatory benefits come to lupus’s aid specifically?

Researchers have wondered this, with some studies undertaken to get to the bottom of the question. One study has tested to see if ashwagandha has anti-autoimmune benefits at all, and the results have been quite promising.

And yet, more studies have also investigated how ashwagandha could directly help lupus. In this one, a pure powder of the root was used on a test subject with a form of the condition. Ashwagandha, in the end, helped many aspects of lupus, including reducing inflammation, protecting the kidneys, and helping normalize immune function.

In addition to one’s doctor’s recommendations, ashwagandha may be a highly valuable herb for lupus to have on one’s side.

Another popular herb in the East (and almost equally as popular in the West), astragalus has a wide range of benefits. Like ashwagandha, astragalus has immune-boosting properties, too.

Can astragalus help people who develop lupus as well?

One thing’s for sure: astragalus certainly has good effects for inflammation and immunity. In this study, for example, the herb was found to be very effective for treating inflammation in a test subject with colitis due to autoimmune-like causes.

For thousands of years, astragalus has been a traditional folk tonic for immune problems, too. And though there haven’t been any direct or formal studies testing to see how it helps lupus, this major review on natural treatments for the condition—owing to both its historical use and modern studies— includes astragalus as a key herb and important player for those seeking more holistic choices.

The review cites specifically that astragalus may help curb overactive immunity, thus lessening the severity of lupus symptoms holistically over time—though more studies are needed before considering it a replacement for any mainstream lupus therapy.

Ever heard of burdock? Though it, too, has many benefits, none are more famous than burdock’s use for powering up the immune system.

We have European, Asian, and American herbalism to thank for this remedy.

A truly cosmopolitan herb, the root is also enjoyed as a vegetable and delicacy in many Asian countries. One could even call it an undiscovered superfood if one considered the full extent of its health properties.

Is lupus support one of these many qualities? For an herb famous for boosting skin health—one of the many aspects of health afflicted by lupus—it’s no far stretch to think that burdock could provide amazing holistic support, too.

But that’s not all. Burdock hasn’t been directly studied yet for its potential against lupus—but studies do show that one of its main compounds, arctigenin, is noticeably effective against autoimmune-type inflammation.

For this reason, burdock could be a choice herb for one’s personal herbal medicine cabinet against lupus, in addition to doctor recommendations.

Herbs of many types may be great home remedies and companions for people facing lupus. But what about medicinal mushrooms?

Certain healing mushrooms of great repute can lend their support to lupus.

And none have a greater reputation than reishi mushroom. An edible fungus with a heap of healing powers (plus a large body of research to support them), a mushroom-like reishi is still yet considered one of the best herbal supplements for immune issues out there.

The real question is: can it help lupus? More than any other healing mushroom currently known, the research established suggests that yes, it very well could.

The most convincing research established yet—and possibly for any natural remedy to date— is found in this study. In it, a formulation containing reishi was used on a test subject with lupus.

The results: lupus symptoms appeared to subside, and the subjects could function much better than before, with the help of reishi.

When it comes to helping the immune system, there is no mushroom more perfect and splendid for the job than maitake mushroom—also known as the “hen of the woods.”

It certainly comes close to rivaling reishi mushroom in its immune powers.

This is mostly owed not just to its longstanding traditional use for immune issues, but also to the wealth of research on this singular mushroom. In terms of the role it could play in naturally helping support autoimmune conditions (including lupus), the research is getting quite convincing.

Like in this study: maitake was appraised for its ability to help with autoimmune inflammation. What the study showed was that certain compounds in maitake called glucans, not only helped the immune system balance itself better but also alleviated common issues caused by chronic inflammation—such as memory issues and more.

Could this make it a great healer for an autoimmune condition like lupus, too? It’s very possible, though more studies are needed.

A unique fungus native to boreal forests, chaga mushroom—up there with reishi—is considered one of the most effective healing mushrooms in the entire world.

Luckily for those with lupus, boosting immunity numbers among its benefits.

Though there’s lots of research supporting the many ways chaga empowers health, there’s few to date that spell out how chaga can help with lupus—but that’s not to say that there isn’t some evidence already.

Such as in this study, for example. Chaga extract was used on test subjects that had cancer, with effects that were very beneficial for the disease. But, as an additional discovery during the research, compounds in chaga—called polysaccharides—were found to have an “immunomodulatory” action.

Though this hasn’t been tested on lupus, chaga being an immunomodulator means it very likely has a balancing effect on autoimmunity. This means there could be perks for people suffering from lupus.

A roster of immune-boosting mushrooms simply wouldn’t be complete without mention of turkey tail mushroom.

Like many other medicinal mushrooms before it, turkey tail is very well known for boosting the immune system. It’s not researched or known to treat lupus, though current research—at this pace—is very well headed in that direction.

This is because, like chaga, research is proving it to be an immunomodulator.

In this study on turkey tail, it was proven that proteins extracted from it had abilities to help balance the immune system. This is an important balance that must be restored in people with autoimmunity.

In addition to immune-balancing qualities, studies also show that turkey tail mushroom has anti-inflammatory effects. When combined, its ability to soothe inflammation—and heal the immune system—together work as a powerful force against the symptoms of lupus, though more studies are needed.

LIFESTYLE AND DIET TIPS FOR LUPUS

Herbs and mushrooms, when used holistically over a long period of time—in addition to doctor advice—can be foundational support for health and symptoms when dealing with an autoimmune condition like lupus.

In addition to natural remedies, the following are common habit, lifestyle, and diet changes doctors and experts may recommend in order to increase chances of relief—and reduce chances of flare-ups—in one’s future with lupus.

FIND THESE BOTANICALS IN OUR IMMUNE-FOCUSED FORMULA

Each of these immune-enhancing mushrooms, which studies suggest could also benefit autoimmune conditions (such as lupus and many others), are special featured ingredients in our immunity herbal formula, Optimal Immune. 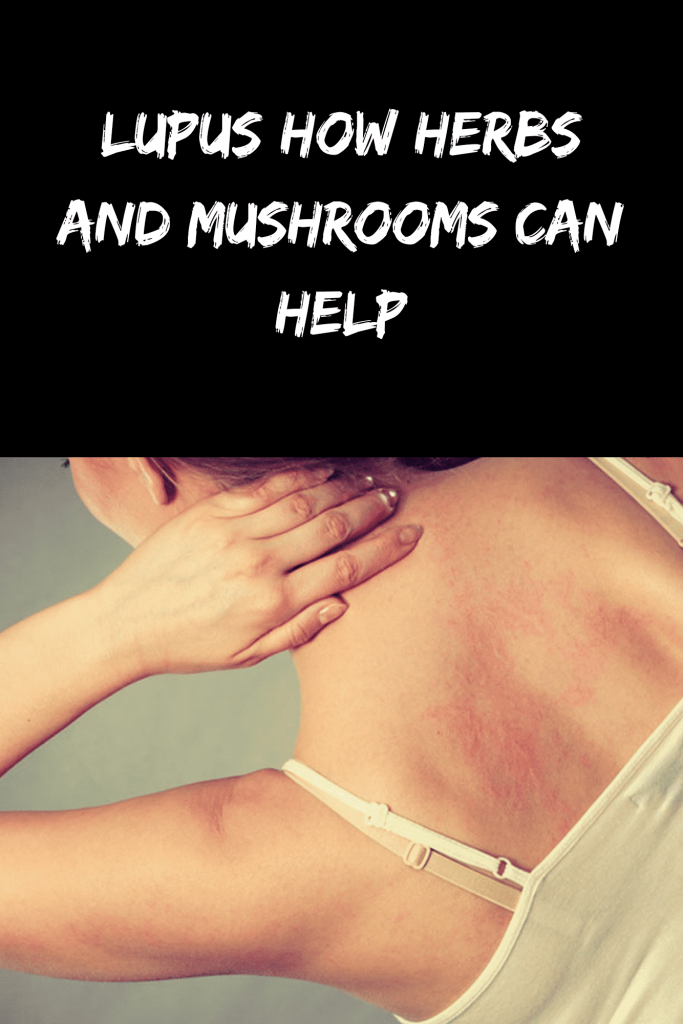 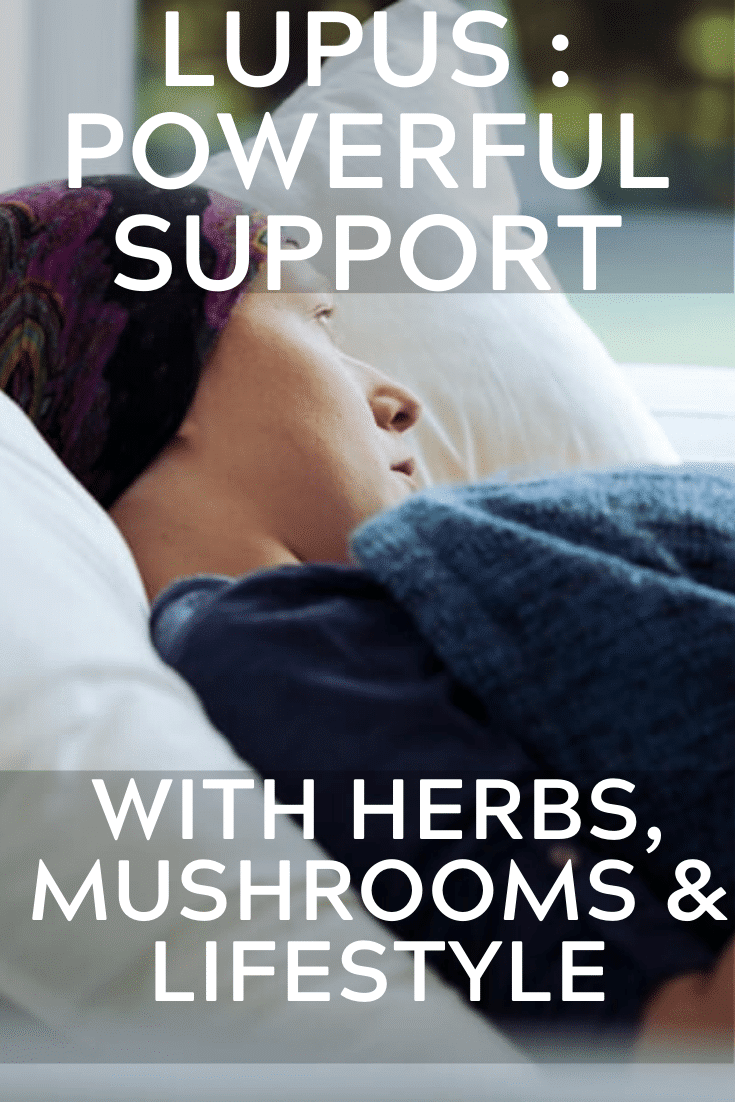